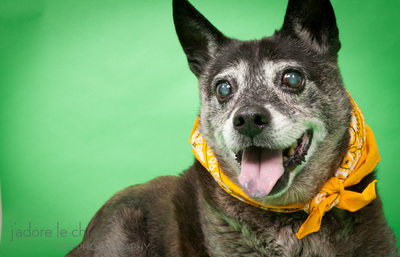 “When I say his name, when I look at his pictures, when I think about him, it just always produces such huge warmth. I don’t think I’ve ever met a more cheerful, funny, and endearing dog!

Cesar has had several big loves in his life time and I feel the luckiest in being his final and maybe strongest one. Cesar’s inner beauty was beyond glorious, his sweetness never waned, and his undying devotion to me saw both of us through to the end this afternoon.

Although I have the honor of saying to the world that Cesar was MY dog, he really was a true Muttville dog in that he represented everything that this rescue group stands for. I was only one of many admirers of Cesar who was able to look beyond the outwardly unusual look he had about him, the rickety little walk, the round odd body that was so huggable and squeezable, the big eyes that had seen so many things in a lifetime. I know there was a “Super Cesar Fan Club”, but I have to say, hands down that I was the president and CEO of that club.

Thank you all for your kind words over the past three years and the appreciation expressed over my adopting what turned out to be a dog of a lifetime!

Tonight I tuck Cesar into my heart and know you will too" – Love, his Mom

Cesar is a nice older gentleman, about 11 years old, and a bit portly weighing 45 pounds. He would benefit from some gentle walks around the neighborhood, wouldn’t we all!? Sweet and gentle, Cesar gets along very well with all the mutts here at Muttville HQ. He just arrived on Friday, and he is settling in nicely. Check our website for updates on this wonderful elder sweet boy.

Sadly, Cesar has passed away. But thanks to wonderful friends, he spent his final days in a loving home.